Employees can earn a $500 bonus for referring a Direct Care employee to ACR Homes! You must be listed as the PRIMARY referral source on the applicant's application. You the referring employee must still be employed at the point of bonus being paid out (and not on leave).

Bonus are paid out as follows:

With the new quarterly bonus system, Emergency Floats (E-Floats) can make $60,000+ per year (includes the bonuses for 3 quarters, totaling $10,000) by working an average of at least 50 hours per week for twelve months (including awake nights).

Or work as a full-time E-Float for nine months (September through May) and make $45,000+ (includes the bonuses for 3 quarters, totaling $10,000) by working an average of at least 50 hours per week (including awake nights).This could free you up to take June through August off for summer travel, mission work, or an unpaid internship you couldn't otherwise afford.

Can't commit to being an E-Float for an extended time? Choose to work only one (or two, or three) quarters as a full-time E-Float, then go back to part-time (or full-time) as a long term float or at a house or take a leave of absence (LOA). This means you could take fall semester off and work as a full-time E-Float for September through November and receive the $5,000 bonus (plus all the extra pay from the E-Float differential). Given that we have a smaller need for floats over the summer, you can not choose to make Jun through August your only quarter as a float.

LPNs who start working at ACR Homes will get a $2,000 bonus if part-time, and a $3,000 bonus if full-time. LPNs must be hired by May 1st and begin training by May 15th to be eligible for the placement bonus. (All bonuses are taxable income.)

Other ACR Benefits for Employees

Looking for the Pod Schedule?
Use your ID# and password "seemypodschedule" to view your current Pod classes. Need to sign up? Email your on-boarding coordinator.

Need to register for an American Heart Association First Aid and CPR class? We have an online training registration, sign up today!

ETP Scheduling is online as well. University of Minnesota and University of Wisconsin River Falls students can learn more about the Employee Transportation Program (ETP) on our website.

Looking for more hours (and money)? There are always plenty of open shifts at other homes on the Open Shift website. Login today and pick up a shift.

Timesheets are online, but can sometimes be tricky to find. Good thing there's a link here!

Who is eligible for benefits?

Current employees, to access your benefits information click the link below. You can now complete open enrollment, add a dependent and update your personal information online!

This description of compensation and benefits is offered for informational purposes only. This information is not intended to be comprehensive. All questions regarding eligibility and benefit levels should be directed to ACR's HR department and/or the specific plan documents. Benefit and eligibility requirements are subject to change, and such changes may not be reflected in this description.

Find out more about your 401(k) by logging into your account online at www.401k.com. You can access your statements on the 401k.com website, was well as portfolio information, tutorials, financial news and other financial tools. You can also speak to a financial advisor with ACR's fiduciary by contacting Scott Lichter at slichter@christensengroup.com or 952-653-1077. You can also speak with a Fidelity rep at 1-800-835-5091.

Direct Care Professionals, you can give yourself a raise!

For Direct Care Professionals, the most common shift times fall between 1 p.m. and 10 p.m., as well as weekends and awake nights, with different levels of compensation for each.

ACR’s Direct Care Professional pay differentials can result in a significant bump in your pay if you choose the right shifts! 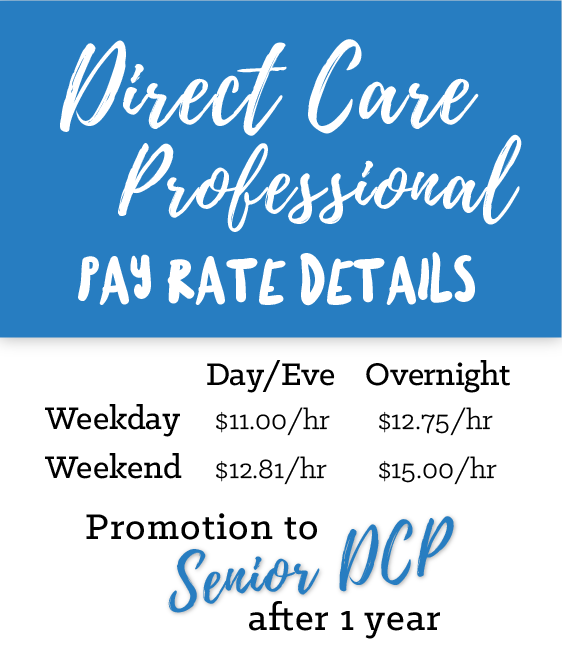 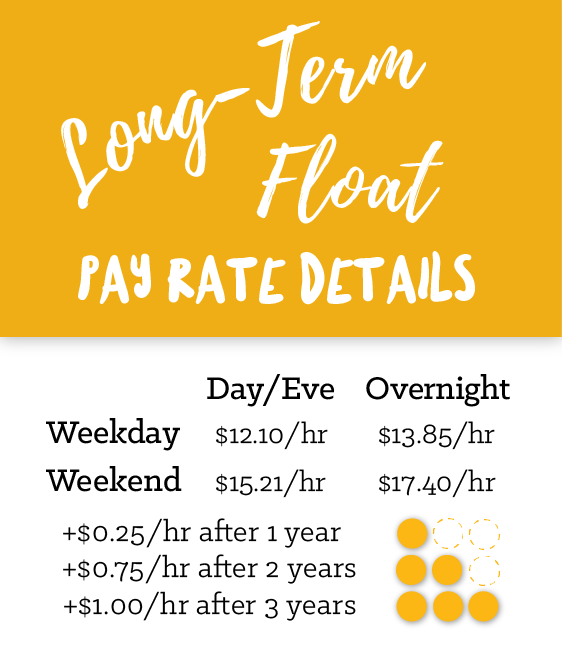 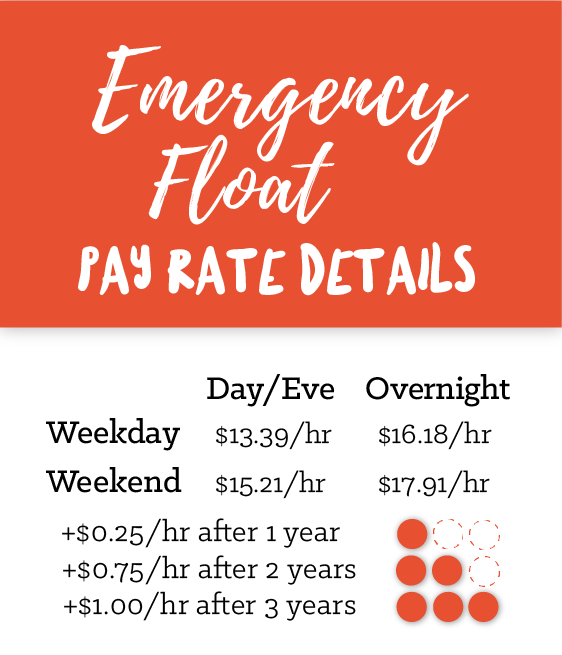 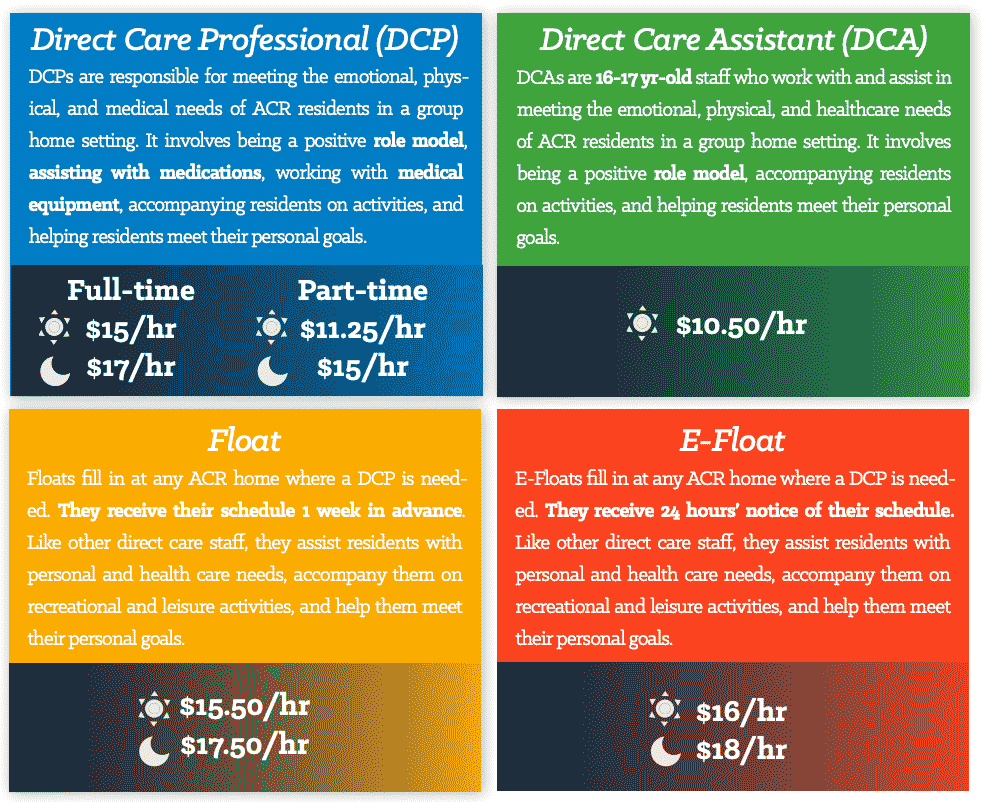 ACR's SAFE (Staff Agenda Fund for Emergencies) fund was established by employees in 2008 as a way for employees to lend a helping hand to co-workers who find themselves in financial crisis due to unforeseen events such as illness, medical crisis, spouse job loss, and other emergencies. Helping a co-worker in need fits with ACR’s core values, it is rewarding for both the giver and the recipient, and ultimately it has a positive impact on the tone and morale in our homes.

ACR employees have the option to contribute to the ACR SAFE through regular payroll deductions or one-time contributions. Donations are strictly voluntary and 100% of donations go directly to the fund with no administrative expenses. To donate or to join the SAFE committee, Employees can fill out the SAFE donation form below.

Employees who want to apply for assistance can download an application form below or ask the house residential supervisor or program director for a SAFE application form. Gifts awarded to recipients are determined by employees who volunteer to be on the SAFE committee.

Programs Like the SAFE Fund Make ACR the #1 Workplace

Gabe works at an ACR group home that supports four very active people who have developmental and behavioral disabilities. He’s on a “go with the flow” team of staff with high energy and a huge sense of humor.  He’s also a college student at the University of Wisconsin in Eau Claire.  He would typically drive 75 miles to Woodbury once or twice a month to work “power weekends”--32 hours from Friday evening to Sunday afternoon. For Gabe, that's a fun and efficient way to get a paycheck and gain work experience. Working for the #1 workplace in Minnesota is a great resume builder, too. For his supervisor and coworkers, they love being able to count on Gabe to handle weekends.

ACR’s SAFE Fund to the Rescue

Last fall I had some unexpected and major car problems. I found myself in the impossible situation of needing to work a lot of hours to pay for my car, but having no way of getting to work. My Program Director suggested that I apply for help from the SAFE fund--that’s the Staff Assistance Fund for Emergencies.

I was apprehensive at first because reaching out for charity is humbling. That night while working an awake shift I sent an e-mail to the SAFE requesting help. I heard back at 12pm the same day, and there was a $500 check waiting for me at my base home. The amazing generosity of ACR and its employees allowed me to completely fix my car, which allowed me to continue my job supporting residents I care about, which helps to pay my bills. I love telling people about how special my job is, not just because I’m paid to better the lives of others, but because my fellow ACR staff and leaders are concerned about my well-being. It’s programs like the SAFE Fund that make ACR Homes the #1 workplace in the state of Minnesota.