“I’m in my last semester. I’m a biology major and I play volleyball. Initially I was full-blown ‘I want to go to PA school’, but coming up I’m going to start an MBA with an emphasis in healthcare management and we’ll see how I like that. My plans are still to go to PA school afterwards. My MBA program will be online. I can still work at ACR, and play volleyball and everything, so it’s going to be a great combo of things I like to do.”

“At my house, we have all ladies, and I would say we’re very family-oriented. You’ll never find the residents hanging out in their rooms by themselves. For the most part, we’re all together and very interested in each others’ lives. Laurie is the ‘Mother’ of the house, for sure. She actually is a mom herself so it very much shows in the home. One time I took Laurie to her daughter’s house for dinner. That was really nice because they incorporated me into their family that night. And being there for dinner, they were so just gracious, and welcoming.”

“I did an internship at ACR. My internship paper was based on resident empowerment and a lot of it was exploring different aspects of what it means to give your resident the most empowerment in every way you can. Giving them a choice. I had been talking with Laurie a couple times about it. She had mentioned, “The staff don’t even ask if I want pop or coffee in the morning. They just do it for me.” I got to thinking, you know that’s actually huge—these little details that you don’t think about, you just want to get the task done and be the most time-efficient. But then if you take a step back, not giving Laurie that choice of pop or coffee, that’s a big deal to her. She won’t say something to you some of the time, so you don’t even realize you’re doing it. That’s the most dangerous thing. You don’t realize when you’re taking power away from them, and the little power that they have, it’s so special. And so important to them. So we have to focus on that, on eliminating that, on accident especially.”

“When I was new, I was trying to be the most polite I could, always on my best behavior with Laurie. But the person that Laurie is, she’s not expecting me to be this…perfect person….and as long as I’m very honest with her, she has no problem. I feel like that was a big eye-opener for me. She’s just another person that wants another relationship, another friend relationship–not just another staff who is going to come and go. We joke the entire shift. Laurie is cracking a laugh every other sentence with me. I think she appreciates it, and just, both of us can appreciate the honest, genuine banter.” 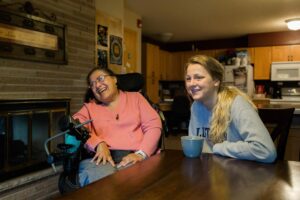