“I came across the state to college at University of Wisconsin-River Falls. I thought the first semester I was going to try to go without working—didn’t think I’d need a job, was just going to focus on school and thought I’d be ok, but I wasn’t ok. By October my bank account was depleted because I’m paying for school and everything. I started looking for jobs. I saw ACR in the UC. I tried to push that fast because I really wanted to get hired at ACR before I heard back from any other jobs. I had talked to Phil about it thought it was a job I’d really love. I did an on-campus interview and got hired that same day. Really good luck for me. I had never done a job like this so had no idea what I was going into, but I was willing to give it a shot. It was all surprising at first. Before this, I had worked at a dairy queen. You’re just making ice cream. All the things we get trained in here—it’s really cool.”

“I’m a student and I am on the improv team—I’m the Vice President of the River Falls improv team, so you’ll never catch me working a Monday night because I have improv 5-7. As the VP, you kind of have to show up. It’s one of the side things I really do to help balance between school and work to give yourself a break. For those two hours a week I for sure have a break and can go do something I love, apart from work, because I love work too. I don’t love school that much.”

“Last summer I spent half of the summer going on a road trip across the United States with my sister. We saw some amazing places. We went to Hollywood. People aren’t as nice on the West coast as they are in the Midwest. Someone did try to sell me a banana boa on Hollywood Boulevard. Very convincing man…almost bought the little guy. I would’ve named him Dennis but my sister didn’t want to drive back home with a boa. Once we got back to Wisconsin I had the realization of ‘Oh heck, time to make some money’. I needed to come back and work my butt off at ACR the last half of the summer, trying to make as much money as I could. Road trips are expensive, but worth it though. Buy experiences, not things. So I wouldn’t be homeless and I could be a workaholic, I stayed with a few families through Airbnb that month and a half while my dorm was closed for the summer. I met some amazing people. It was great to live with these people and learn about them, and they learned about me. One family took me out to dinner on their house boat. Yeah, a house boat…totally extra. Between the two houses I worked at, I worked 65 hour weeks back then. Some of the shifts had incentives on them and it really helped me save up some money that August.”

“Other than that, I say ‘heck’ a lot and I love Jess St Aubin. Put that in there. Also, a shout out to my OGs- Meg, Emily, Kennedy, and Heidi.” 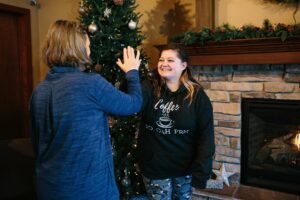