“You know, I started at ACR like so many people do—so young, and so unaware of who I was and who I wanted to be, but also what the world could look like if you opened yourself up to people who are different than you. Mary’s experience with the world is just so vastly different than my own in a lot of ways, but also so strikingly similar in a lot of ways too. It didn’t take me long to recognize in her the way she appreciates the super small things—the things that are easily overlooked in life. She takes time to appreciate those things, and noticing that in her made me develop that appreciation too.

She was special to me right off the bat, but what really sealed the deal was the first time I took her home with me to Iowa for Thanksgiving. Seeing how having her in the room can really impact other people who become less rushed, who become so aware of other people’s needs, and I think that’s what Mary does. She forces people to slow down and listen. And not listen with their ears. I think that’s why she’s so special to me.

I’m pretty stubborn, maybe even more stubborn than her. She has just understood from day one with me, I won’t just give up because it’s the easy route. I’m not going to force her, but I’m going to try and try and try again. She responds well to that. I’ve recognized that a lot of patience and a little willpower and a little stubbornness goes a long way with Mary and she really respects that and responds well to that. Mary is more introverted compared to her housemates, so it isn’t as easy for her to make friends. When I look at her and think about how much she means to me, it’s just different because I know that I’m part of such a small group of people that gets the luxury of having her in my life, and so few people get to say that. It’s just so powerful.

I came back to ACR in March. I’d been running my photography business, Joy by Jo, full-time for pretty much 2 years, but stayed connected to the disability community. I love my photography business so much, and I’ve worked so hard for it. COVID came, and weddings didn’t look the same, so my schedule just got clearer and clearer and clearer. I saw an ACR recruiter’s post targeted at people who had lost their jobs due to COVID, and it was a perfect storm for ACR needing an astounding number of staff to fill new openings from day program closures. I thought I could go back for a little while—just a couple months—to help out. I started working every day. I could’ve taken this summer “off” but there is something about ACR and the residents that ACR serves that is just so special and so hard to leave. It was hard to leave when I left originally. I just can’t imagine my life being disconnected from the disability community. Photography picked back up again this Fall and it was crazy busy—14 weddings in 8 weeks. I was still working. I had to figure out a way to just make it work because I didn’t want to leave. 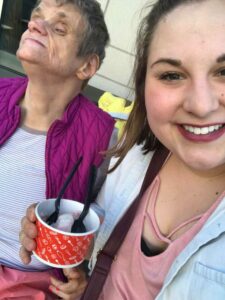 January will be 10 years since I was hired at ACR originally. That’s coming up so soon. Part of me is like “I’m not old enough to have worked 10 years anywhere!” Not long after I started back then, we had a resident pass away. I had been there a matter of hours before. That was a major turning point for me. I then realized that this is a job where I am truly impacting somebody’s life. I can do that in a really meaningful positive way, or I can not take this seriously and have this as a just a job. What would that say about me as a person and how we take care of other people? Not to just show up to get a job done or to punch a clock, but to show up because it matters. That’s when everything changed for me. This job has impacted the rest of my life because it’s not what I was planning on. I wasn’t planning on meeting Mary. I wasn’t planning on how she would deeply change my view of the world. I wasn’t planning on how she would show me that I could advocate for others, but also how I could advocate for myself. I’m a better, more whole person because of her presence in my life.” 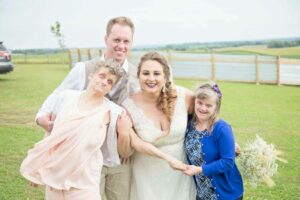