“I love J.Arthur’s. This spot by the window, yeah, it’s kinda my home. It’s real nice in here, and now it’s pretty quiet. It feeds into my introvertedness and I’m cool with it. I sit here once or twice a week now working on Pathway stuff. I got a text letting me know that as an ACR employee I could still use the coffee shop after it closed to the public = hands up praise emojis. I’m the guy at the window. This is what I do. I try to be an extrovert, but it just doesn’t come out as much. If people come talk to me, I’m totally down. I just don’t initiate it too often. I met Dorothy Nelson when I was sitting here last week and she told me this crazy story, how Rick, one of my Tiller residents, used to go on outings with Phil to schools and stuff like that. And then I guess, she said there is a student who asked Rick what the most important piece of ACR was and he said “respect”. The acronym used to be “relationships”, but it was changed because of that. Good ole Rick is a legend. He changed the R in ACR to respect.”

“I graduated college May 2015. When I was at Northwestern, I didn’t think I’d ever start working at ACR. I was already busy and it wasn’t my field. A couple years later, I was working at the job I’m still at today- a music lesson startup called Pathway Music Institute. Not a whole lot of finances were coming in since it was a startup. I knew I should probably get some money. I talked to my friend who worked here. He loved it. That pushed me over the edge and swayed me. When I applied I was like, “I’m doing this. What in the world”, but here I am, it’s been almost a year. I was looking for income and flexible hours and now I do mostly awakes. The mission of ACR was something I was totally on board with. Acceptance, communication, respect is what you should show to humanity. It’s just….restoring dignity to those who can’t really build it up themselves and showing that to everyone else. Whether it’s ACR or another organization that I’m connected with, it’s that aspect of restoring dignity to people.”

“I’m at Tiller (s/o to Riverdale too). Such a sweet house. All the guys are super good. Whether it’s playing football with one of the residents in the front yard, getting some WWE moves tried out on from another, watching “Good Times”, watching “Dumb and Dumber”, or going bowling with another. I went to one of my resident’s Mother’s Day recital – He’s killer. I didn’t know that at all. He killed it on both vocals and guitar. Crazy. I never hear him play piano or guitar at the house. He watches a bunch on YouTube though, so probably learns a bunch there. I don’t know. Dude is good.” 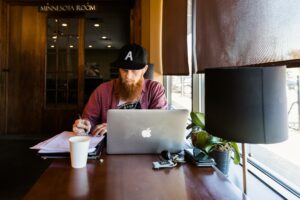