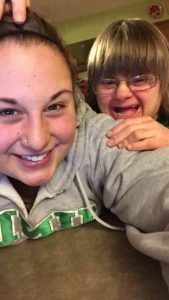 Jordan Crosser Buckellew has been a direct care professional at the ACR Home on Dale Court since 2011. She came from Clear Lake, Iowa,  to attend the University of Minnesota and discovered ACR Homes during her freshman year.  Her work at ACR brought her to the realization that she enjoyed being an advocate for people with disabilities. In fact, the disability community became one of her callings and led to her involvement in the Miss Amazing Pageant.

Miss Amazing is a nationwide program designed to celebrate the abilities of girls and women with disabilities.  During her sophomore year at the U she established  Miss Amazing Minnesota and serves as its State Director.

She went on to graduate with a degree in Theatre, Psychology, and American Sign Language.  After graduation she took a position with Make-A-Wish Minnesota as the Referral Intake & Volunteer Coordinator, where her job is to engage with families and medical professionals.

Jordan’s phenomenal career trajectory and her interest in being an advocate for people with disabilities has also fueled her gift for writing.  Here’s a piece she wrote about one of the women she works with at the ACR Home on Dale Court.

She takes both hands and cups them on my chin, forcing me to look into her eyes. “You are beautiful. You have to believe it! You were born that way!!” Her hand grabs mine; she holds it to her cheek with the kind of smile only she can provide. I believe the statement because it comes from her. Her, the woman who knows every word to every Annie song; the woman who cries when her dementia steals her thoughts; whose hugs mean little arms around your waist and giggles trickling up your spine; the woman with a diagnosis of Down Syndrome she does not let define her.  Her, who, along with three other spectacular ladies, turned me from a scared 18 year old design student into a confident advocate for the special needs community.

Between philosophical conversations about the streets of heaven to giggling while wearing matching Halloween costumes to bringing a resident to my home in Iowa for the holidays to attending the funeral of not only a resident, but a friend, my time at ACR does not fit into words. Rather, it is comprised of these moments; raw emotions. Joy, frustration, admiration, sorrow, trust, and love.