Many of the wonderful and caring people who come to work at ACR are looking for a part-time job. Perhaps they’re students, and they see their work at ACR as an important part of their future career path, whether it’s nursing, medicine or social work. But many quickly discover a meaningful experience awaits, and some end up staying longer than they planned.

Here’s how some of our direct care providers end up taking their stint at ACR from part-time to full-time.

[Read this music major’s story about how ACR turned into a meaningful full-time career.]

Part-time job turns into “a way of life”

Eve Thao began working at ACR as an undergraduate student studying psychology. During that time, she completed a case study. Now, she’s taking a gap year before starting her Ph.D. in clinical psychology, and she decided to spend it working at ACR.

“It’s not about the work, it’s more of a way of life,” Thao says. “It’s not just a job, I genuinely want to make their lives better.”

Spending time with people with disabilities inspired her to keep doing this work.

Most of all, working at ACR aligns with how she wants to live her life, working someplace that’s “Bigger than myself, more than just a job, knowing that I’m helping someone live a better life.”

These things made the decision to switch to spending a GAP Year at ACR easy for Thao.

“Working at ACR makes me feel more like I’m hanging around with people I enjoy being with all day,” she says.

An unexpected start to a great career

For others, ACR became a launching pad for their career.

Jon Hess began when he was an undergrad studying to become an elementary school teacher. As he took overnight shifts, he figured this would be a great way to pay for school, while picking up experiences that would apply to the classroom.

As he moved into a daytime shift and began developing a rapport with the residents, he began seeing new possibilities for his career. A knowledge settled over him: “This is something I’m going to be doing for some time,” he remembers. “I’m okay, it felt right, I felt comfortable, so I’ve been full-time ever since.”

[Read about how working full-time at ACR can keep student loans manageable.]

For Lucy Brandt, ACR was her first job in college while studying for her nursing degree. Like many before her, she saw the role as something that would give her the relevant experience she needs for her nursing career.

She didn’t think much of her impact at first until a maintenance worker pulled her aside and told her he had a family member with developmental disabilities, and it was clear to him that Brandt was “cut out for this job.”

That’s what it took for her to see new possibilities for her career: Telling her that she was good at the job and had a knack for connecting with the residents.

Six years after earning her nursing degree, ACR is still a big part of Brandt’s career plans. She works there part-time to maintain her position, while today, she works full-time at the hospital, getting the many experiences she wants to have. One day, when she’s ready, she’d like to make her work at ACR permanent.

[Read about how this nurse found a meaningful full-time career at ACR.]

Looking for a work experience with meaning, a job that’s more than a job? Learn more about working at ACR and apply today.

Posted in Employment, Make a Difference 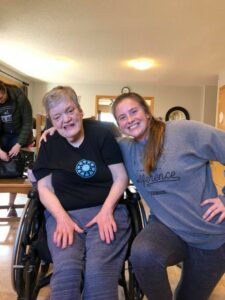