“I was born in the United States, but I’ve spent about half of my life between the US and Chile. When I moved from Chile to the US in 2006, I only knew about the US from what I’d seen in movies. I knew no English and nothing about Minnesota. Those were funny days looking back on them. I remember feeling like the odd foreign kid for greeting people with a kiss on the cheek and for speaking with made up words that kind of sounded like English. School was rough that first year, I’m confident I learned most of my English from watching hundreds of Drake and Josh episodes. Different times.  As time went on, I adjusted to the new culture and Minnesota began to feel like home.”

“We moved back to Chile in 2011.  In Chile I lived a different reality from the Minnesota suburbs. From taking the public transit every day, to wearing a uniform to school, to catching your teachers smoking in recess, it seemed like everything was different.  It was great, but life in Chile also opened my eyes to poverty and the harsh reality that millions of people live through. I realized I was in a position of privilege, so I pledged myself to be of good use and to strive for a profession that had the well-being of people as its core goal.”

“I started college at UW-La Crosse as an international business major. I did well in economics classes in high school, but my interest was exercise and human movement. I didn’t go into a major related to exercise because they were science heavy and, boy was I bad at science. I didn’t trust myself, so I went the easy route. It took a few college courses to realize I did not like business- I couldn’t handle it. My second semester I decided I needed to go for it. I switched to an exercise science major. It was a difficult decision, but a necessary one. I didn’t do my best in most of my courses right away, but for the first time in a long time, I actually felt motivated to study, I was engaged in the lectures, and I wanted to stay late. Eventually, I started doing much better. In 2018 I saw that the U of M had a kinesiology program. The U of M had always been my dream school, but I hadn’t gotten in as a high school senior. So I took another leap, and decided to transfer to the U with the goal of becoming a kinesiologist.”

“Before working at ACR I had little to no experience in health care or working with people with disabilities. In one of my motor development courses, my professor mentioned there was a need for PT specialists of certain disabilities. That really caught my attention, so I thought I should learn more about people with disabilities. I had seen many flyers for ACR at the U so I decided to apply for a direct care position. I was intrigued that ACR offered multiple student benefits including a PT based internship (which I am currently working on right now). I must say though, I was really nervous about applying.  The job seemed really intense and I didn’t know if I was capable of working in such a medical based workplace. I took the leap anyways. I joined ACR in the Summer of 2019, and I can confidently say it was one of the best decisions I have ever made.  Since joining ACR I have a clearer picture of the field I want to pursue in physical therapy. Before ACR, I was 100% pursuing PT to work with athletes. Now, I am motivated by the idea of working with children and adults diagnosed with diseases that have disrupted their motor development. I’m very grateful I got this job. It’s helped me understand where I want to go in life.”

“The staff at my home are like family. They are incredibly encouraging, loving, and helpful. Work is not easy, in fact I considered leaving during my first month, but my coworkers were always by my side, encouraging and inspiring me every day, especially on the more difficult shifts. We stick together and will bend over backwards for everyone at the house. We also spend time outside of work, which is great. Thanks to them I learn how to be the best health care worker and caregiver possible. I am glad I stayed.”

“Each of the residents at the house are a blessing to work with. I’ve learned so much from each one. I’m currently working on my internship with Joey*. It has been incredible to learn about his story and how difficult it has been for him throughout his life. He used to live in an institution when he was younger, but then ACR took him in. He used to be seen as one of the most challenging people to work with in all of the state. Now he’s doing so much better. To say Joey is perseverant is an understatement. He has overcome so much, and it motivates me to help him continue to grow. He is such an inspiration to me,  and I am grateful I have the opportunity to work with him.”

*name changed due to HIPPA 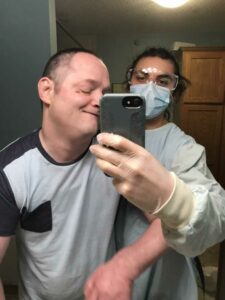