“I started at University of North Dakota and then transferred here. My track coach actually left my freshman year at North Dakota so I was like ‘Well, if I want to make it in the big 10, I’ll have to do pretty good here.’ So I followed him to the U, a year after. I did discus and hammer—all of the throwers I knew worked at ACR. I also hated North Dakota…I’m not a small town girl. I’m from Madison.”

“I graduated in 2016 with a youth studies degree. Youth work is a more hands on approach when it comes to working with young people. Not only do we work inside the schools, but outside of them and specifically with that young person and their family on a deeper level. I want to open up my own community center. Not sure where. I grew up in community centers—after-school programs and stuff like that. I think it’s very beneficial for anybody to have a community that loves them and raises them. It was like a whole community that raised me growing up. I just want to give back is all.”

“I started at one house and I’ve been with ACR about 2 years now. I don’t really like being comfortable, so I need change. It started to be repetitive. Floating seemed like a fun thing to do. Before I had even thought about floating, I had already went to a few other houses just for fun. I just like being on my toes. The longest I had ever been at a previous job was a year, just because I like change and usually you’re never able to change anything inside your job, doing the same stuff all the time. So, I’m definitely glad I’m a float now. I’ve been working around 55-60 hours a week but I honestly don’t really mind it because I don’t have a life outside of work. For now this job is taking up a lot of time where I used to spend in the gym practicing.”

“It definitely doesn’t feel like a job at all. It just feels like I’m hanging out with friends. Roy here, he’s a baby fanatic. He loves babies and baby dolls. He has a baby doll we call YaYa. I know it’s gone back for at least the past 10 years for sure. It’s a love hate relationship for him. Some days he wants us to play pranks with YaYa and some days he wants us to love on YaYa. He actually has about 50 baby dolls that he keeps in his closet. We blame anything that goes wrong on YaYa. Every now and then we’ll have a ‘baby attack’ and pull all the baby dolls out and put them all over the house—literally on top of the TV, on the ceiling, in the couches, on the kitchen table, on the floors. It’s definitely a McMenemy thing. He loves it.” 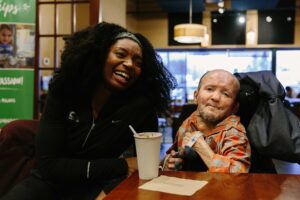