“We’ve been meeting here for coffee for at least 5 years now, roughly once per month. He likes to say he’s going to meet his older brother for coffee, but I’m younger than him. I think we’re about 3 years apart. He’s going to be….84 this month. See, because his birthday is so close to Christmas, a lot of people don’t get double gifts. Anyways, I usually send him a watch for Christmas because he’s kind of tough on watches, and then I send him a birthday card with some pictures of presidents. If he doesn’t have his watch, every so often he’ll ask me what time it is. One time I sent him a digital one but I was afraid…they’re a little tricky. The staff would always set it for him. I try not to send him those. They’re just not as easy to read. I try to get the ones with the big face.”

“I used to get him a half roll of snuff. When he used to be at some of the other homes, he had a bus card and he didn’t have a wheelchair. He’d take the bus down and buy his own snuff. You remember Butler Drugstore? He’s been chewing snuff for a long time, all part of the cowboy image—the Western connection—is how he ended up doing that. Then, when I had my minivan, I’d pick him up and we’d go to one of the five Holiday stations that were all within a mile of his house and get snuff, anyway, or we’d go to cub foods and get it. We’d stop at Mac and Dons and get him a cheeseburger. We had a lot of interesting stories since we’ve been meeting.”

“He never got interested in sports. I never talked to him about the Twins or the Vikings, but he sure likes the Lone Ranger—of course you can still get the reruns. Every so often I’ll look at that just to hear them play the William Tell overture—the theme song at the beginning of the show. Of course they’re all in black and white because they go back that far. He knows Happy Trails too. I’m not sure if he knows the words to it, but I like listening to it. He’s got more than one of those cowboy hats too. Oh and you’ve got a badge on your shirt too. Both sheriff badges.”
“Sometimes he calls me more than once a day. You don’t need to call me more than once a day. If the shift changes, they don’t know that he already left me a message at 12. Well and when—whatever day it was—I answered it, and I got his voice right away. He’s gotten to the point where, nobody has to hand him the phone. Right? He just needs a little practice sometimes in answering. I might ask a question or say something, and I’ll not be sure if he’s still on the phone. Sometimes I’ll say something and he won’t say anything, I wouldn’t hear anything on the other end—just breathing. It’s just something to remember, that’s all. But you’re getting better at it.” 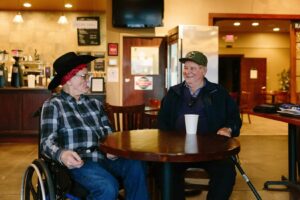